This stunning fossil is that of a 50 million year old soft-shelled turtle called Apalone Heteroglypta. 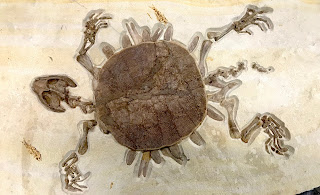 Apalone Heteroglypta was described by Edward Cope in 1873 but was originally called Trionyx Heteroglypta.  It was later renamed when a more complete skeleton was discovered.  It is very distinguishable from all other soft-shelled turtles from Fossil Lake because of its rounded shell, and the near full loss of the eighth costal bones.  It is a very rare find and is one of the most beautiful turtles from the Fossil Butte Member of the Green River Formation. 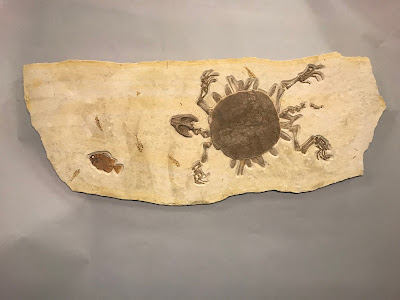 We uncovered this turtle over the summer, just 7 inches above  second large turtle.  This turtle was found in many small pieces and didn't look like much to begin with. After a lot of work by our friends at fossilogic it is a beautiful piece of art with an incredible animal from a time long spent.

Check it out over at Fossil Shack
Posted by Unknown at 8:50 AM 1 comment:

Fossil Shrimp but no coctail sauce


One of the more rare fossils of the green River Formation are fossil Shrimp.  These small creatures did not fossilize well and are very difficult to prepare because of their delicate nature.

At the Fossil Shack quarry this summer, we discovered two.  This is rare, in that most diggers are lucky to find that many in a lifetime.  One of them is one of the best ever discovered.  It was preserved in exceptional detail.

The second shrimp will soon be on display at the Thanksgiving Point Museum of Ancient Life.  Stop by and check it out.


For the finished fish check out: http://www.fossilshack.com/knightia.html

http://www.fossilshack.com/
Posted by Unknown at 1:17 PM No comments:

Prognathodon the Mosasaur: King of the sea!

At the same time T-Rex was roaming the land, the giant mosasaur Prognathodon was the top predator in the sea, preying on everything from turtles to sharks.

These terrifying creatures could grow up to 60 feet (18 metres) long, weighing as much as 20 tons and would have spent most of the day swimming near the seabed stalking their next meal. Even though these amazing animals lived at the time of the dinosaurs, they are members of the Order Squamata, meaning they are very closely related to modern snakes and lizards.

Prognathodon, and the mosasaurs, were the most advanced hunters to ever roam the sea. They had a combination of special adaptations for hunting and killing prey that are only seen in other hunters in isolation.

Prognathodon had a large variety of tools to sense prey. They had very large eyes in relationship to the skull, which would allow them to see well in low light. They also possessed a third eye on top of their skull. This was not an eye like one might initially think, but was a light sensing organ which would allow Prognathodon to sit silently on the sea floor and sense changes in light as prey swam overhead. This same feature is seen only in a few modern monitor lizards.

Prognathodon also had what appears to be Jacobson’s Organs very similar to those used by modern snakes to smell prey. This would allow Prognathodon to flick its tongue in the water and smell its prey from great distances.

Prognathodon also had a large number of pits around the upper and lower jaws and on the end of their snout. Most scientists believe that these were similar to those in sharks, called the Ampullae of Lorenzini. These organs sense the faint electrical impulses of their prey and allow them to zero in in even zero light conditions.

After Prognathodon had prey in its mouth, it had an arsenal of weapons that made sure it would not leave. Perhaps the most bizarre and incredible is a second set of teeth set back in the throat called pterygoids. These teeth were attached to muscles and operated independently of its jaws. This means they could reach forward and pull prey back, while maintaining a grip with the jaws themselves. Modern Pythons and Anacondas have similar sets of second teeth that also move independently to march the snakes head over their prey.

Prognathodon, as well as most mosasaurs had two sets of hinges on their lower jaws. The front hinge was connected by a very elastic tissue, which would allow them to open their mouths incredibly wide. It is also believed by many scientists that lower jaws were not connected so they could expand their mouths to accommodate very large prey, much like modern snakes.

Given all of these advanced features, it is easy to see why Prognathodon was truly the king of the sea.

Although resembling a big cat, Hoplophoneus was actually one of the Nimravids, more popularly known as the ‘false sabre-toothed cats’. Nimravids were an early branch of the Carnivora and were actively hunting long before the emergence of the true cats of the Felidae. Although they looked very similar to true cats, there were many marked differences such as non-retractable claws, and lack of inner-ear bones.

Nimravids seem to have acquired many of the traits of the later sabre-toothed cats like Smilodon and Machairodus, since they also have enlarged sabre-like canine teeth in the upper jaw. Hoplophoneus also had two flanges of bone that grew downwards from the lower jaw, just as some of the other later true saber-toothed cats. These gave extra support and protection to the canines because when the mouth was closed the tips of the upper canines would not extend past the lower jaw.

The skull displayed here also has another incredible feature that is quite different in Nimravids and sets them apart from Felidae. In this amazing skull, a very nice endocast of the brain is visible. Their brain shape and lobes are quite different than those in modern cats, being more elongated, yet still very well equipped for hunting.

The relatively short bones that make up the legs of Hoplophoneus indicate that it accelerated quickly to top running speed, but would would not have been as fast as some modern cats because its legs could not cover as much ground with each stride. For this reason Hoplophoneus is believed to be an ambush hunter that would hide in the undergrowth or tall grasses, exploding out and chasing down prey animals before they had time to get away.

Millions of years before members of the cat family (felidae) evolved into the famous saber-tooths, a primitive group of carnivores, now extinct, had already adapted themselves to this specialized niche. These were the Nimravids, which diversified into many of the specializations we see in living felids. In addition to developing a saber-toothed morphology, Nimravids had invaded the predatory niches occupied by todays Bobcats, Leopards, Lions, and Cheetahs.

Based on fossils dating from the Eocene of North America, approximately 40 million years ago, the Nimravids had already acquired many of the diagnostic features of the feline family. These ancestral species had already developed small chin flanges, small lower canines, reduced dentition and many other incipient characteristics associated with smilodonty (could be a made-up word).
The Oligocene provided ideal conditions to develop and perfect forms such as Dinictis, Hoplophoneus, Nimravus, Dinaelurus and Pogonodon. They evolved, survived, and flourished. During most of the Oligocene Epoch, Dinictis species were widespread and diverse, and ranged in size from a Bobcat to a Leopard. Near the end of the epoch, certain populations of Dinictis gave rise to extreme hyper-developed forms. One of them was Pogonodon, which evolved into a top super-predator.

The decline of hyaenodonts during that time may have allowed species of Pogonodon to evolve into a larger, more dominant, saber toothed type of carnivore.
The current fossil record indicates that the evolutionary history of Pogonodon is restricted to the Late Oligocene of North America.

Features of this skull also indicate that like modern lions, Pogonodon may have lived in groups or prides consisting of many individuals who hunted and fed together. This skull of a very old individual has teeth, which in many cases, are worn down to nothing more than nubs. The condition of these teeth would have made it very difficult for the animal to have hunted and killed other creatures and suggest that it may have just participated in group feedings after the hunt.

Unlike most animals, the upper teeth of Pogonodon have an inward curve and continued their growth until the animal died, or the teeth fell out. The lower teeth had an outward curve, causing them to constantly rub against the top teeth, creating an efficient way to keep the teeth sharp over the animal’s lifetime. These features are visible clearly in the teeth of this animal. The teeth have been worn down past the enamel and the molars are still sharp. One tooth has been exposed to the root, and the curve can be plainly seen. At one point, this was believed to only be a feature present in hyaenodonts.

This Pogonodon skull also sports a distinctive canine that was broken off at some point in life, and then used and worn down extensively to gain a polished and rounded tip. The skull is also mussing a number of teeth that were lost during life and the bone in the law has partially or completely filled in the root spacing. This indicates that this was indeed a very old animal indeed.

Ammonites are some of the most fascinating fossils on the planet.  They are geometrically perfect and that is why they are so appealing to the eye.  These shells perfectly illustrate the Golden Ratio.


These amazing creatures are related to modern squid and octopus but developed a solid outer shell.  The shell would grow with the animal and segment into hollow chambers to give the creature a neutral buoyancy in water.


Ammonites came in a variety of shapes and sizes.  They are very diverse and doe to the fossilization process they are made up of a variety of different materials.